I would be Flabbergasted, if ANYWHERE IN THE WORLD, there is even ONE Single Judge who concurs with this U.S. Supreme Court Ruling, No. 09-10323. You can add your amicus curiae Opinion to this Mix; as a Private Citizen, a Black Robed Sub Rosa, and send it to the President. 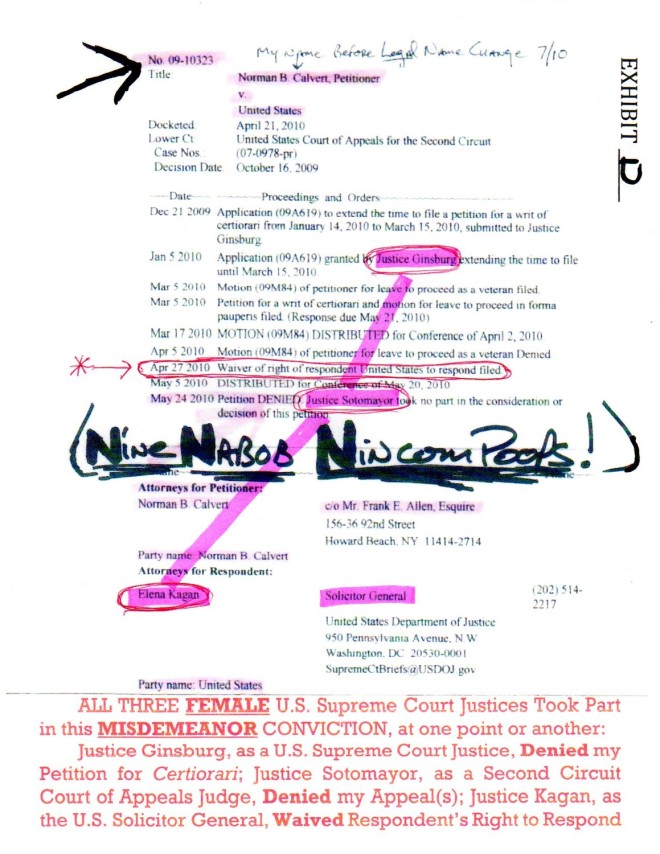 I took it all the way to the U.S. Supreme Court, No. 09-10323. All three of the Female Supreme Court Justices took part in this MISDEMEANOR CONVICTION at one point or another along the line. Along the way, THREE Defense Attorneys; THREE Assistant U.S. Attorneys; SEVEN U.S. Magistrate Judges; THREE U.S. District Court Judges; and only God knows how many Second Circuit Court of Appeals Judges were involved with this, in the SIX TIMES that it arrived there: Once on Direct Appeal; and FIVE TIMES by a MOTION for a Writ in the Nature of Audita Querela. ALL SIX TIMES the Second Circuit Court Ruled WITHOUT  JURISDICTION!

The ONLY other Misdemeanor in the History of Humankind to get more attention than this Misdemeanor, is Hip Hop Supa Dupa Diva, Missy Misdemeanor Elliott.

This MISDEMEANOR Judgment of Conviction is FATALLY  FLAWED in two essential areas which violate the Fifth Amendment’s Due Process Clause. 1.      It convicts me of “and”, when the Statute reads “or”. Moreover, all three of the alleged “victims” testified in Court, under Oath, that there was no “beating”. 2.    I claim that I was arrested on 2/10/94. The United States claims that I wasn’t arrested until 2/23/94. Either way, since I wasn’t released from "Pre Trial" until 8/29/94, the sentence of “Time Served” exceeds the six month Maximum Sentence, violating Due Process. 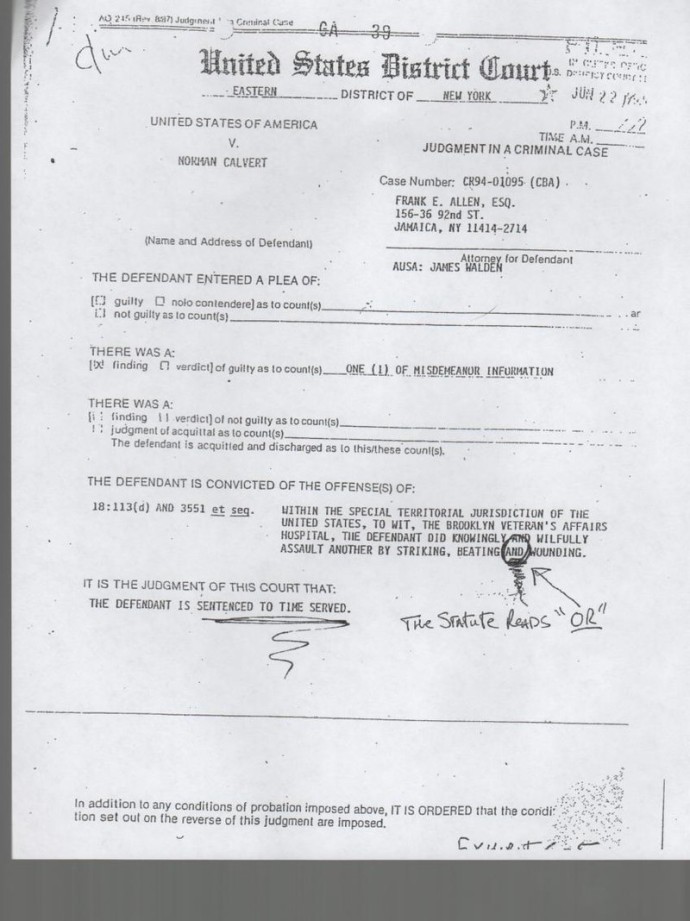 This MISDEMEANOR Information, Filed October 21, 1994, comes 8 ½ months AFTER the February 10, 1994 incident. Inasmuch as JUDICIAL NOTICE can Issue that the "Interim" March 1, 1994 FBI Complaint is BOGUS and MALFEASANT; there is a Lack of “Excusable Delay” for the 7 ½ months which Violate the Due Process Clause. 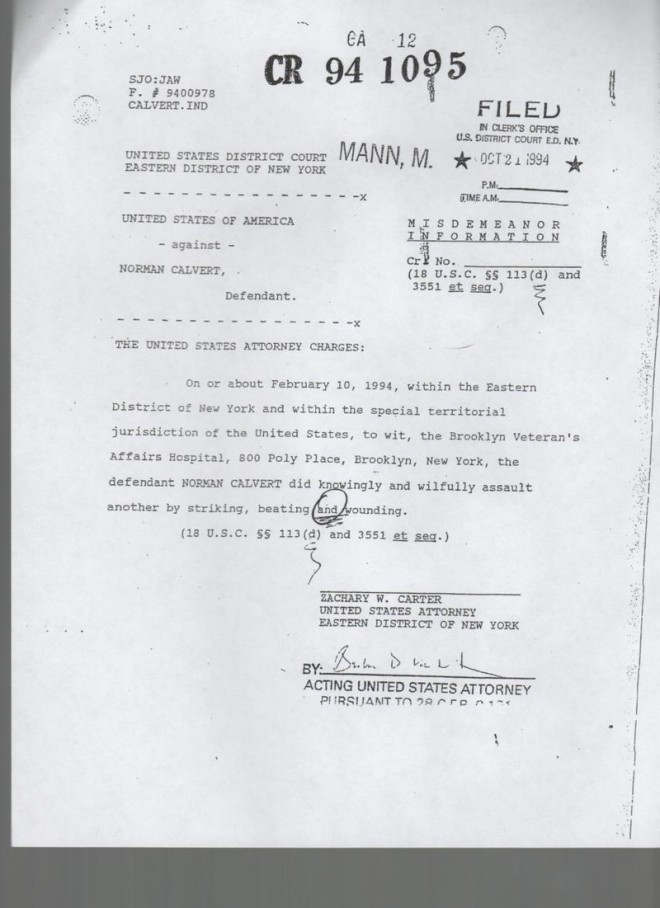 Here is the Statute, Title 18 USC Sec. 113(d). It clearly reads “or”; contrary to the above two Federal Court Documents, which both read “and”. 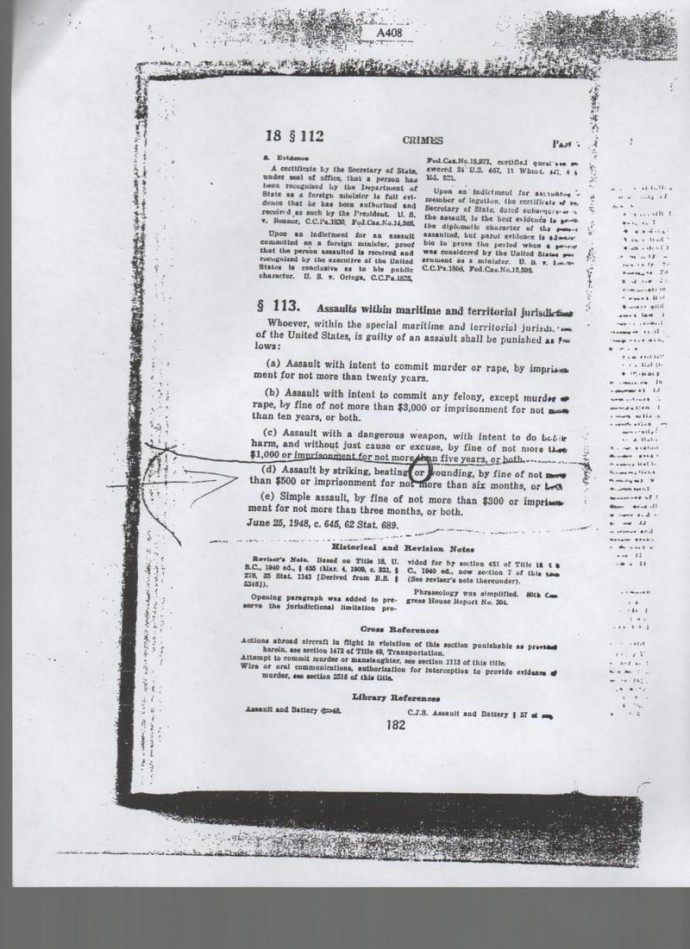 The Court’s Unvarnished Incredulity is explained by that Document, the FBI Complaint, itself: 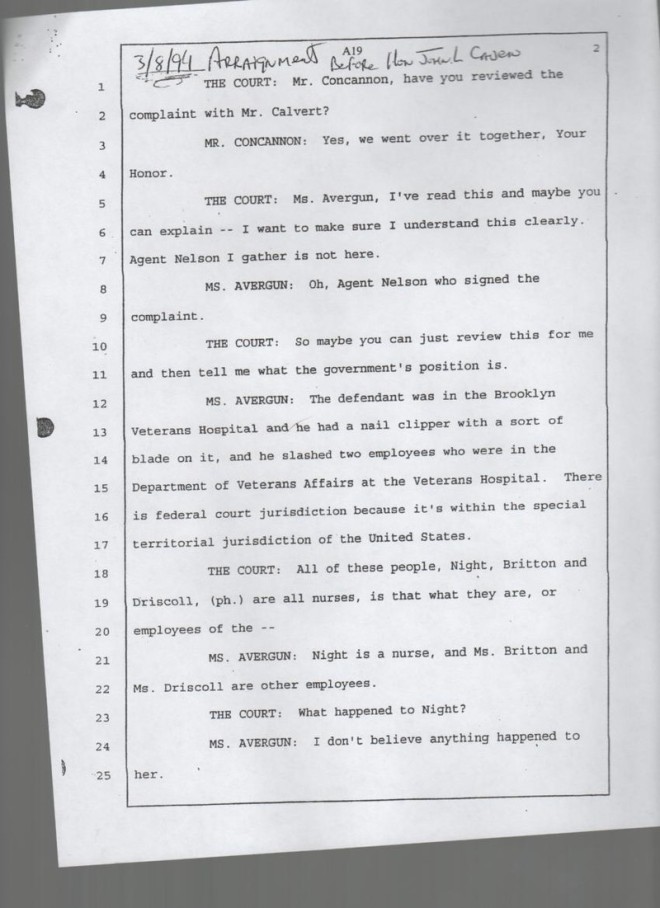 The FBI Swears that Anthony John Nelson’s Signature is real. However, that does not explain the Magistrate Judge’s Signature; conspicuous by its absence; which renders this Complaint Worthless; and EVERYTHING upon which it is based, “Fruit from the Poisonous Tree”, and inadmissible in Court. Also, NOTICE THE DATE, 3/1/94; because it is also VERY Special to Justin Bieber, who was born on that day. 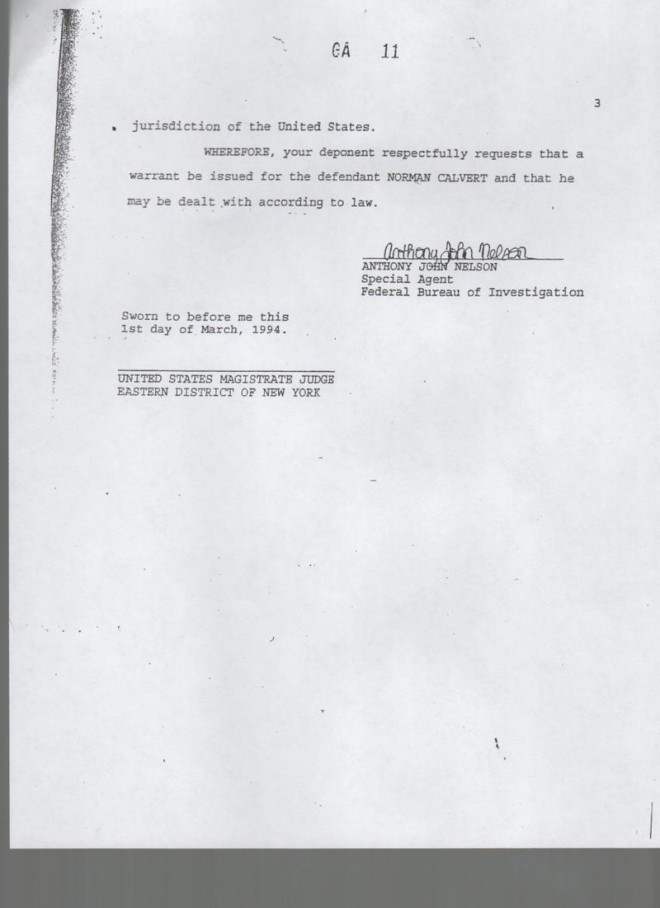 Since the entire FBI Complaint is Worthless, this page is irrelevant; except that it strengthens the Evidence of the Government’s INTENT to Convict me of a FELONY! 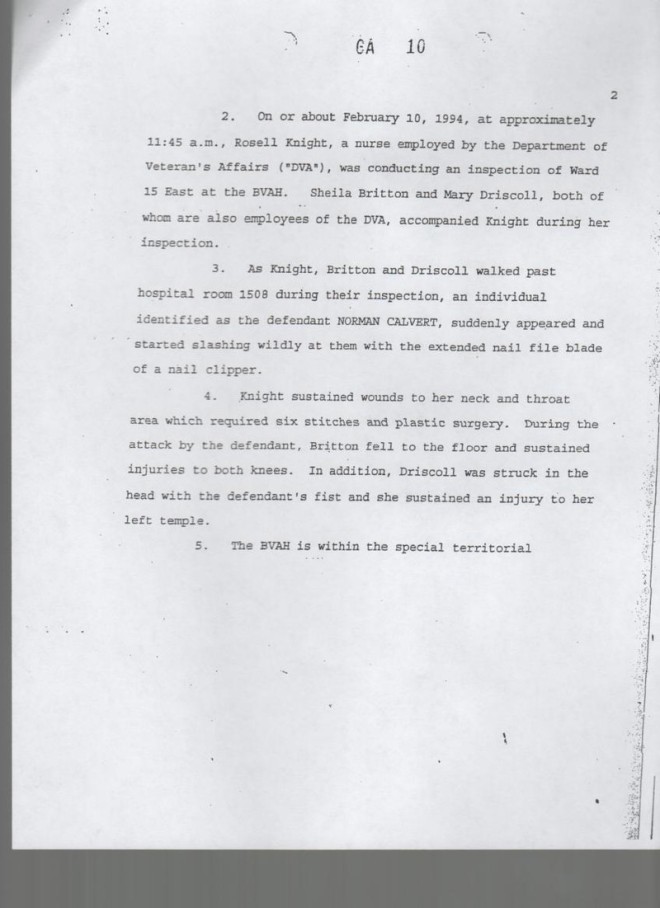 The First Page of the FBI Complaint against  me charges me with a FELONY! This FBI Complaint was only filed to cover-up the Brooklyn VA Hospital Police KIDNAPPING me, and the "Cluster Fuck" that created. 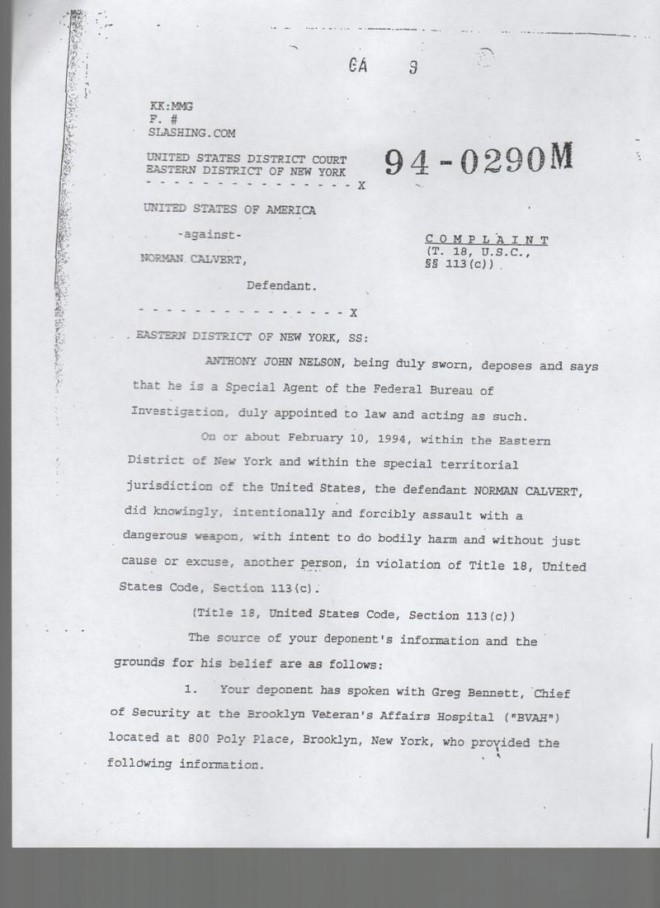 The sixth row from the bottom of Brooklyn VA Hospital’s Chief of Police, Gregory Bennett’s Report,  reads: “The U.S. District Court Warrant for Arrest #94-0290M is Attached to this Report.” However, that “Report” is dated THREE TIMES as 2/28/94; while the FBI Complaint, #94-0290M, upon which that “Warrant for Arrest” is based; did NOT EXIST until the next day, March 1, 1994. Which is, of course, that very same FBI Complaint that was never signed by a Magistrate Judge. 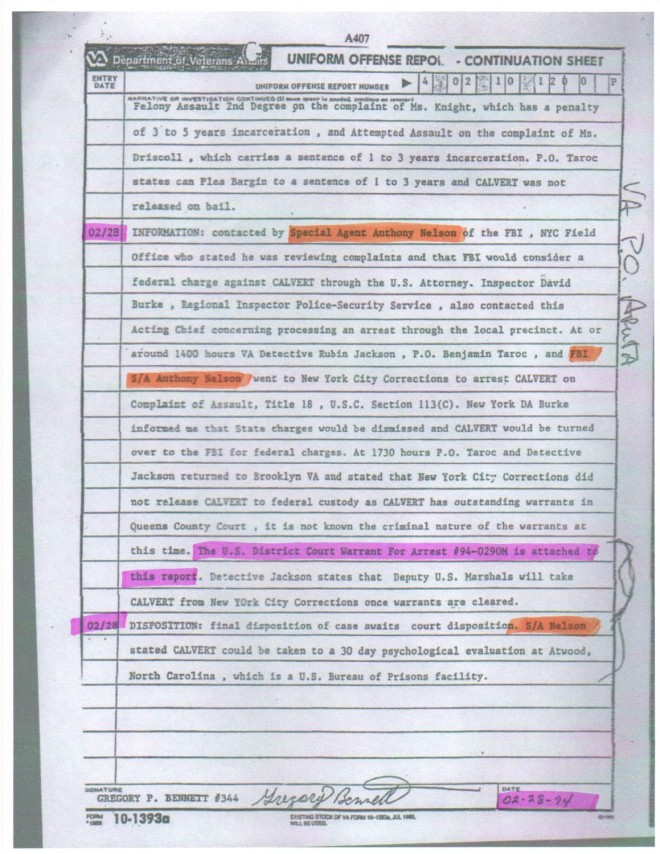