“TAG! You’re it!” The Presiding Judge, in the above COMPLAINT.

That being said, the United States of America should know about me, BEFORE any Imbroglio. Carefully reading Job 41 NAS, is a good beginning.

I have a long and tortured, Remarkably Exciting Federal Court History.

I was first imprisoned by the Late-Honorable Constance Baker Motley, SDNY. And for that Misdemeanor, I was UNLAWFULLY imprisoned in the Lewisburg Federal Penitentiary, for four months. I can’t recall the Docket No.

CALVERT -aka- CAPRICE  v. UNITED STATES, Docket No. 96-CV-0001 (CBA), was to REPEAL Public Law 84-851 [The National Motto shall be, In God We Trust]. Judge Carol B. Amon, now the Chief Judge of the EDNY, Ruled that “GOD” here did not really refer to GOD; and “Dismissed as frivolous”.

Your Honor, check out that Docket Number, “0001”. Will you believe how I got that SPECIAL NUMBER, if I told you? I made a phone call from Riker’s Island, and I asked for it. “Mr. Calvert, you KNOW we can’t do that for you. Those numbers are assigned randomly.” Was the answer I got. Therefore:

Will you believe that I got it by Coincidence?

Will you believe that I got it by Prayer?

Will you believe that I got it by SHORTY’S POOFFLE DUST?

Pedestrian: Like that Prosaic Dozen of Long-Stemmed Red Roses I sent to Them, for the previous Thanksgiving. [sotto voce, on a stolen Credit Card. LOL]. That was in the EDNY.

I was offered a 30 day Deferred Prosecution, and in Judge Haight’s Court, I told them: “Your Honor. I can’t sign this!” In that Kodak Moment, everybody in the Court seemed to stop breathing. Judge Haight finally said: “Why not? What’s wrong?” I said: “Paragraph four says ‘I will associate only with law abiding citizens.’ Your Honor, I don’t even know any ‘law abiding citizens’.” My attorney said: “Don’t look at me. I don’t know any either.” And the AUSA said: “There aren’t any in my Office either.” This is on the Court Transcript.

Judge Haight wrote that letter, Exhibit A, in my WEED COMPLAINT.

Now, in the Chambers of the Honorable William C. Connor, U.S. District Judge, SDNY, circa 1980, his Law Clerk, Bonnie(?), said: “Mr. Calvert, what is it that you want?” Judge Connor then said: “Well, right now he’s not working. So, the most important thing is to get him back on the job.” I said: “If you put me back on the job [NYC Civil Service Auto Mechanic], it will only be as a Provisi-onal or Temporary Mechanic, and as soon as I drop this Lawsuit I will be fired”. Bonnie said: “Oh no, Mr. Calvert. It will be a Permanent Position.” I said: “You can’t do that. I would have to take a Civil Service Test; pass that test; and get hired when I came up on the list.” Bonnie said: “Mr. Calvert. We can do anything we want to do in here.” “ANYTHING”? Man. That’s saying a Lot!

I have a long and tortured, Remarkably Exciting Federal Court History.

“Indeed, it is useless to spread the net In the eyes of any bird;”

BELOW IS A SCANNED IMAGE OF THE LETTER - Not Translatable 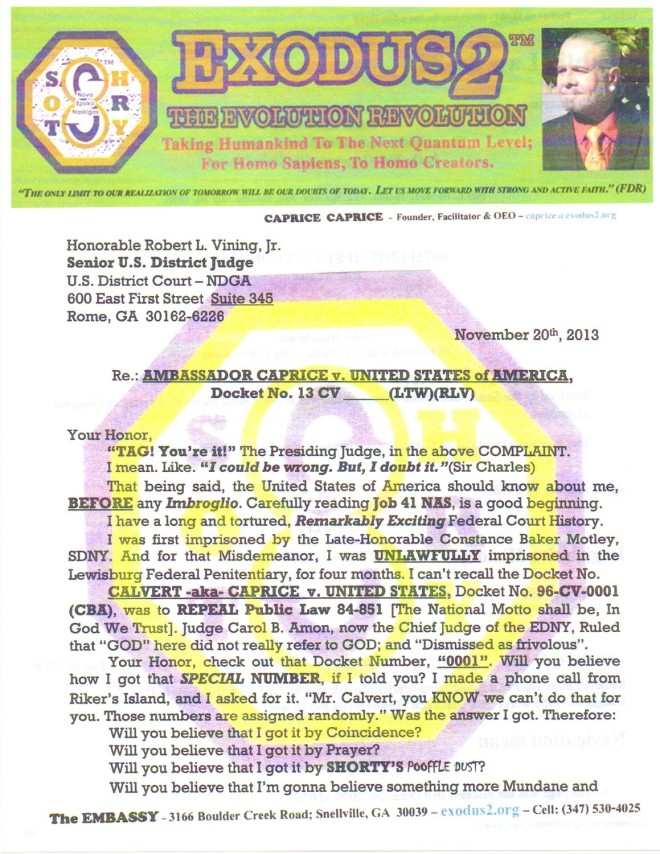 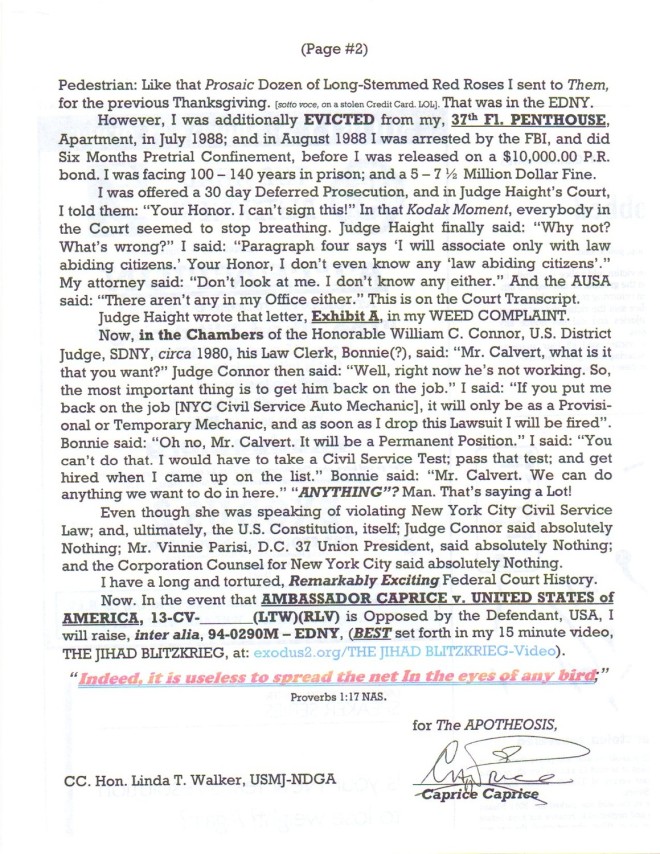