Would this be a SUPERNATURAL  Defense --- in that SHORTY’S POOFFLE  DUST  did Cause the various Federal Courts to commit Inordinate Amounts of LEGAL  ERRORS; which would Axiomatically and Manifestly be Simultaneously Issuing JUDICIAL NOTICE that I am who I say that I am: The Ambassador-at-Large of The Kingdom of Heaven.

CHECK THIS OUT: In early 1995 I had several cans of Incense; Flakes, Granules, and Powders. I bought some packages of different tree barks, from the Arab Store. I mixed up a bunch of this, with some other Mysterious, Occult and Esoteric Stuff, in a stainless steel bowl, and I squirted some lighter fluid on the Mix; and set fire to it. How long should I let it burn? An NYPD Officer drove over to me and ordered me to put the fire out. That’s how long I let it burn.

I crumbled this Mix into a powder, for SHORTY’S POOFFLE DUST; and I put it in a plastic dish soap bottle --- and I took the Subway to the USDC – EDNY; so that I could circumnavigate that edifice, while sprinkling SHORTY’S POOFFLE DUST along the way, and chanting: “No weapon formed against me shall prosper!”

That was paraphrasing Isaiah 54:17a NAS; the whole of verse 27 reads thusly:

“’No weapon that is formed against you shall prosper;

And every tongue that accuses you in judgment you will condemn.

This is the heritage of the servants of the Lord,

And their vindication is from Me,’ declares the Lord.”

WHEREFORE, this Court should Issue JUDICIAL NOTICE that it is Axiomatically and

Manifestly Self  Evident that either SHORTY’S Supernatural POOFFLE DUSTworks effectively in the Physical Realm, and I am The Ambassador-at-Large of The Kingdom of Heaven; or, take the Alternative Niggardly Position that ALL of the Legal Errors in my cases are just a Microcosm of The Macrocosm – in our Purported “Nation of Laws”!  LOL

BELOW IS A SCANNED IMAGE OF THE LETTER - Not Translatable 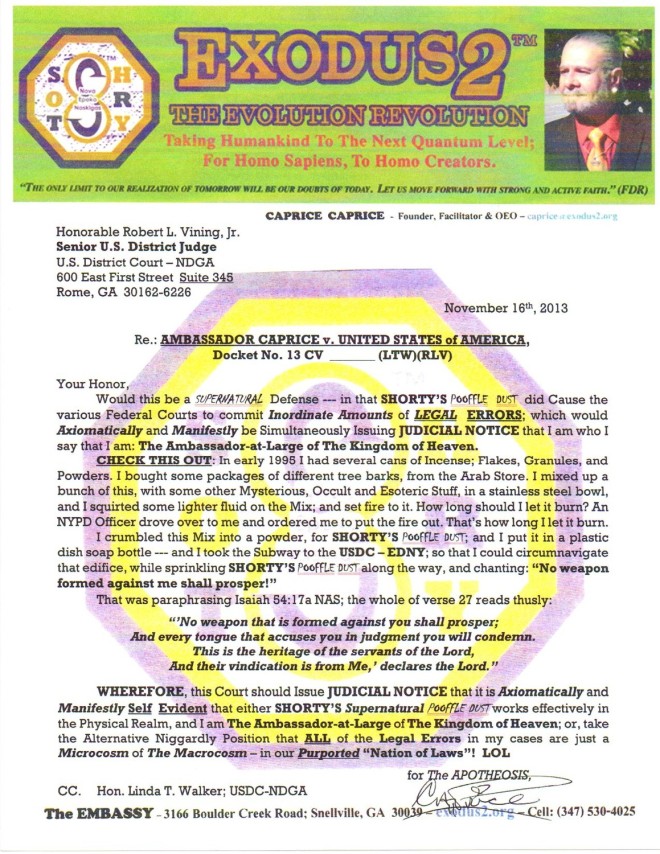